In Spite Of the Rain

Yesterday’s stop in Eugene was productive – I got a good amount of work completed and our Airstream upgrades were completed as planned.

Until very recently, our thinking was to install a solar panel solution which would be installed by a well-regarded RV solar specialist located in Eugene.  Our installation date was Nov-19, but as the date approached we found ourselves increasingly struggling to finalize our preferred solution.  Ultimately we significantly scaled-back our plans, instead modestly upgrading our electrical solution without any solar, but we did  buy and install upgraded batteries and a charge controller.

Actually, the service guys at George Sutton RV did the work and they did a great job.

These new batteries are taller than those that came with the trailer.  Consequently, we had to have our battery box modified.  The solution was to enlarge the box by dropping the bottom a few inches and then re-attaching with fresh welds. 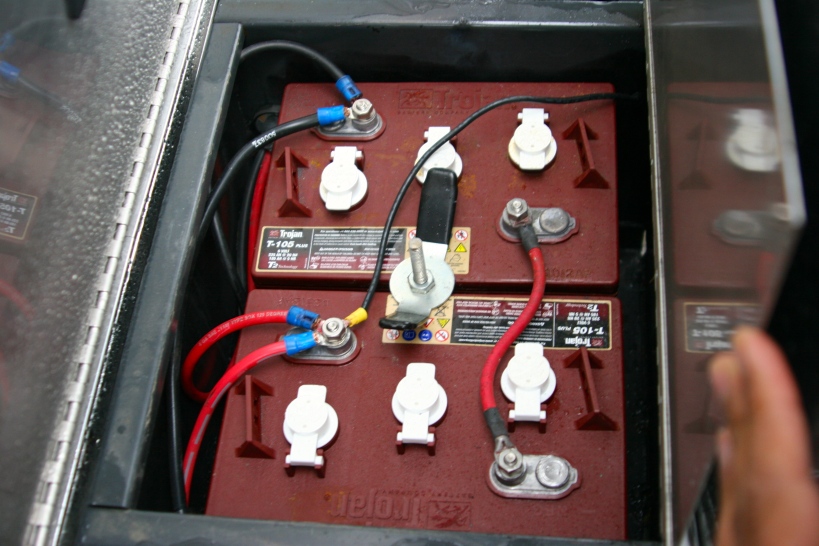 Following our stop in Eugene, we made it Bainbridge Island late last night.  It’s been raining cats and dogs in the Pacific Northwest lately and arriving to our campsite – even in the dark – it was immediately clear that our chosen destination for the week may necessitate reconsideration due to massive flooding.  A quick look revealed that some spots seemed possible, but in the dark of night it was hard to confirm whether we could use the park as our base this week.

We were pretty tired following a long drive day, so we opted to park in the shallow waters of the parking lot and defer any decision to the morning.  Then, we awoke to this…

Only one other camper in the park

After conferring with the park ranger, we settled into a nice spot – level and flood free.

It continues to rain, but we are optimistic the spot will work for us.  Fingers crossed…

Our spot in Fay Bainbridge Park