The plan yesterday morning was to visit McArthur-Burney Falls Memorial State Park (MBFMSP), which is located about 20 minutes from our current BLM location.  MBFMSP is California’s second oldest state park, its main attraction being the whitewater falls of Burney Creek.

Anticipating holiday weekend crowds, we arrived around 9am which is crazy early for park standards.  The combination of a Sunday morning and campers operating on “park time”, things were eerily quiet while we had trails and other popular lookout points mostly to ourselves.   Like most large parks, there are a few “must see” attractions at MBFMSP.  Here, the main event is the waterfall and I understand why.  Unlike many waterfalls, the majority of the water does not ‘fall’ over the edge.   Rather, a significant amount of water is routed through underground channels which end abruptly at the wall of the falls, sending 100 million gallons daily cascading below.

The popular Burney Falls loop trail seems to be a common route for most visitors – it is short, focused on the falls, and conveniently located to the parking lot.  Seeking a bit more walking, we opted for the lengthier trail which continues another 1.5(ish) miles towards Lake Britton.

The river trail to Lake Britton

As was the case earlier this weekend, all this calm water had me bemoaning my lack of canoe or kayak.  A park concessioner does offer rentals, but the steep fees coupled with our time constraints quickly squashed any illusions of a morning paddle I had swirling in my head.

Suffice it to say, we continued to walk.

Returning from the lake, we chose to continue back to the truck by way of the main park road.  Because the park was so empty, we enjoyed a nearly car-free saunter, making a point to enjoy our surroundings as we viewed the area.  Eventually we reached the main campground, which only served to reinforce how fabulous our BLM location was in comparison.  Unlike this relatively crowded state park, our 10-acre campground contained only 7 sites (plus one for the host). 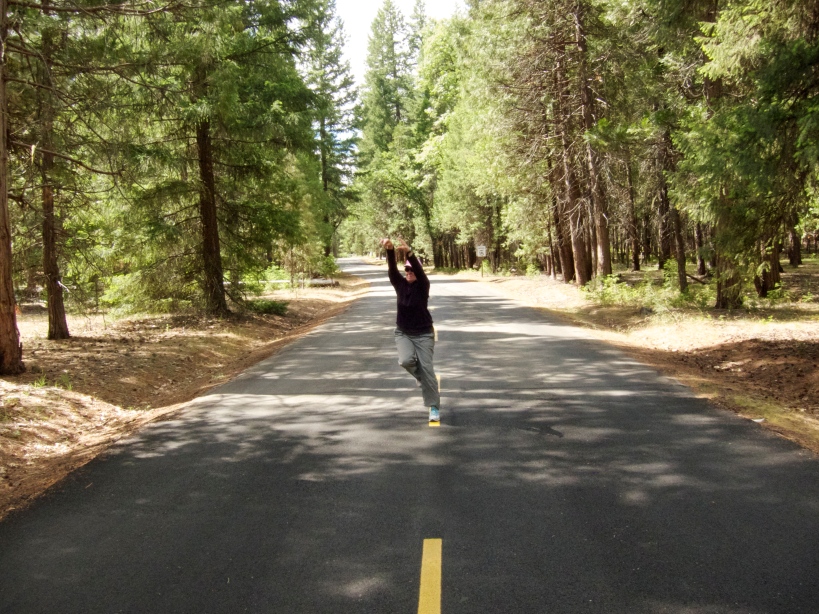 On a whim, we decided to visit the General Store before leaving the park.  Not surprisingly, the selection was mostly junk, but I was struck with the beauty of a handmade bench outside the main door.  Too awesome to be sat upon, I could only reflect on its exquisiteness. 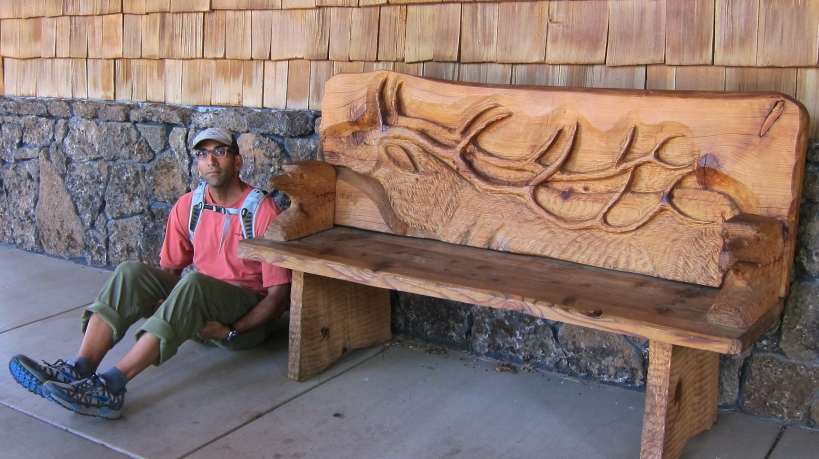 The bench of all benches

As a general rule, dogs are not allowed in California state parks … at least not on any of the interesting trails (yet another reason this state drives me crazy).  This being the case, following lunch back at the trailer, we made plans for an afternoon hike with Lilly – our destination being a trailhead along the Pacific Crest Trail.  For those who don’t know, the PCT is a single continuous walking pathway extending through the states of California, Oregon, and Washington.

Other than its close proximity to our camping site, the section we visited wasn’t anything overly impressive.  It seems that the more time we spend in nature, the higher our expectations bar continues to rise.  Oh how we’ve come so far.  Back when we were living in Chicago as urban condo dwellers, I’m quite certain Kelly and I would have found this particular trail to be amazing.  Now it is simply a nice location to walk the dog.

That said, we love being outdoors and time spent in nature’s playground is always a precious treat.

Wild flowers in bloom along the Pacific Crest Trail

Relaxing and snacking under the shade-cover