Bad Day At the Dog Park

Kelly and I knew life on the road would not be without surprise and/or other challenges, and unfortunately this assumption has already proven true.  Sunday, following a drive from Phoenix to Tucson, I took Lilly to a local dog park to play fetch.  The park was empty when I arrived, but shortly thereafter another couple arrived with two dogs.

The owners were polite – asking me if I was comfortable with them entering with their dogs.  I was assured that both dogs were friendly so I welcomed them in.  As is usually the case with dogs, they did their thing – butt sniffing and making acquaintance.  We owners chatted some; I spent a few minutes petting their dogs.

Satisfied things were ok, I turned my back momentarily to retrieve Lilly’s fetch ball.  Then, before I knew it, one of the dogs had Lilly by the neck.  She was howling in pain and we adults all were screaming.  I’ve never heard such an awful sound come from Lilly; it was chaos.  Eventually we separated the two dogs, but not before Lilly was badly hurt.   I always keep a couple of business cards in my wallet and as I carried Lilly away, tossed a card to owners, hollering that the right thing to do will be to contact me and pay any veterinarian  bills.

I quickly drove Lilly to the nearest emergency vet for care.  The attack resulted in a 2″ gash in her neck, exacerbated by substantial “pocketing” – the separation of skin from muscle tissue – which had occurred throughout the back of her neck.  There were also smaller bite wounds on her ear and shoulder.  The main concerns were the gash and pocketing injuries, which the doctor confirmed would require immediate surgery, a reality I wasn’t ready to hear. 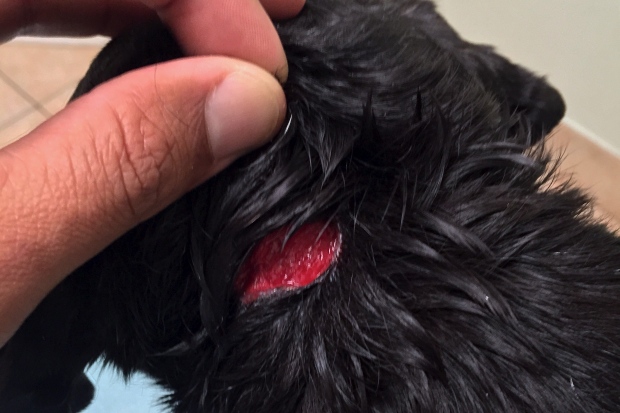 I left Lilly with the vet in the exam room and stepped away to call Kelly with an update.  Meanwhile the attacking dog’s owner – to my surprise, but to her credit, had contacted me via text and email messages, offering to pay all related vet costs, a commitment she honored a few hours later that evening following surgery.  The owner also asked me to keep her informed of any related future costs which she will also pay.  In an otherwise shitty situation, I appreciate her owning up to this without any bullshit or other excuses.

Once home, the initial 24 hours were rough – Lilly whimpered and shook in pain.  Neither Kelly or I got much sleep that evening.  Also complicating matters, a byproduct of the healing process produces an ooze-like substance which must exit the body in order to avoid infection.  To facilitate, two latex tubes are inserted under the stitches, oozing puss all over Lilly … and the blankets and towels we have atop our furniture.  Thank goodness we are now telecommuting workers and able to be by her side throughout all of this. 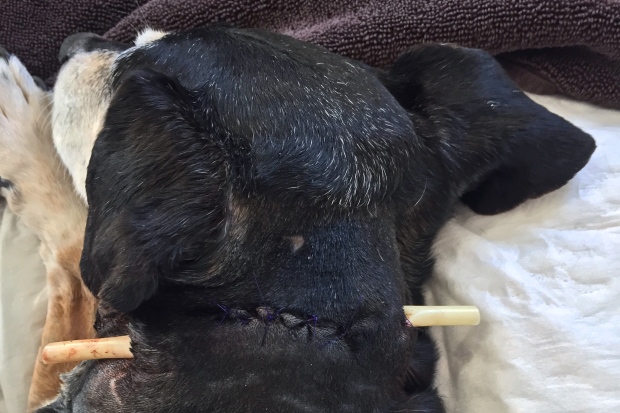 Now, roughly 2.5 days removed from the attack, Lilly is doing better and seems to be regaining her normal spirit.  Swelling remains, but is slowing subsiding and she’s begun eating and pooping more regularly – two indicators all dog owners take as a positive sign.

A follow-up visit is scheduled in two days and if all goes according to plan, the latex tubes will be removed – a big win along the road to recovery.