The year was 1519 and Hernán Cortés, with some 600 Spaniards, 16 or so horses and 11 boats, had landed on a vast inland plateau called now known as Mexico.  Their single goal was to conquer the lands and claim riches over all the area had to offer.  Severely ill-equipped for the task of overpowering an empire so exten­sive in its ter­ri­to­ries, he and his team were thought to possess a death-wish.

Cortés was well-aware of this fact.  And it was for this rea­son, that he offered a simple speech to his followers:  “Burn the boats“.

The command was given to eradicate any notion of retreat and to make very real the level of commitment needed to secure vic­tory.  And with that act there was no turning back, failure was no longer an option.  By burning their ships, the sole means of escape was no more.  At that point forward they would need to claim victory or die.

How’s that for motivation? 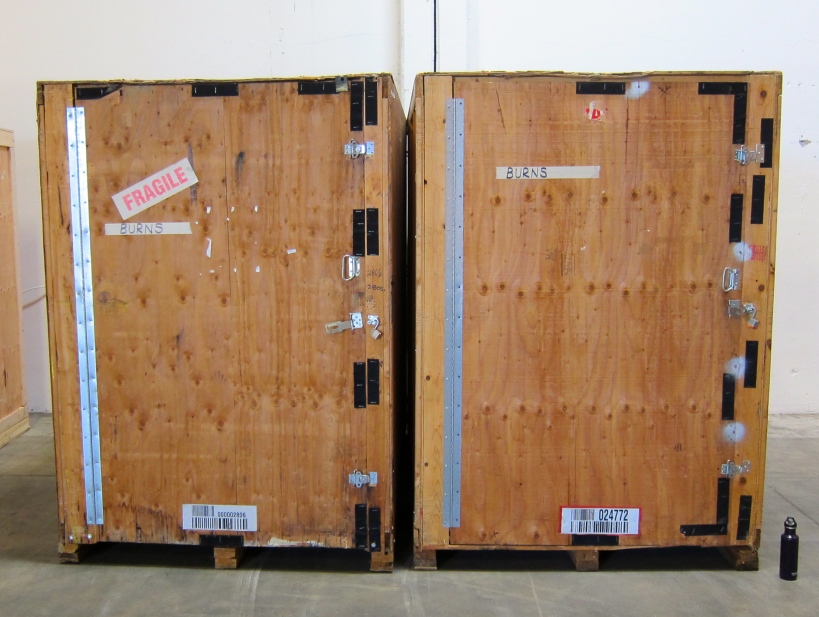 For the past year, Kelly and I maintained the two PODs pictured above.  Together, these simple wooden boxes contain nearly all our belongings currently not physically in Mabel – our Airstream home on wheels.  Each month we pay $100 dollars for the right to maintain this unused stuff in a giant warehouse somewhere unknown to us for the past year.   And with each payment we question the need to continue doing so.

We decided something had to give.  $1,200 dollars spent we were neither closer to using this stuff or eliminating the need to store it.

Yesterday we decided to purge.

But first, we needed to learn where the boxed were located.  How pathetic we only knew the city.

Just over 24 hours later, we’ve deposited what may be the most generous donation to the local Goodwill in recent years.  Other items will be donated to friends, while other remaining possessions are currently listed on Craigslist.  Let the dieting begin.

In our own way, we are burning the boats – these boxes which represent an unwanted safety net.  Directly or indirectly these damn boxes maintain the potential to undermine our commitment to live and travel full-time.  Letting go of this stuff is one step closer to unhindered freedom.  More, once we fully divest ourselves of this furnature, we immediately cease to waste $100 each month.  Trust me, I can think of many was to put that money to better use elsewhere.

And so with newfound enthusiasm to better our living situation, we set sights directly towards something that has been akin to a rock in our shoe – a rarely used, space consuming microwave.  Given our already limited pantry space, the cost benefit trade-offs of keeping this appliance simply didn’t seem worthwhile.  Consequently, the microwave found itself bundled in with the aforementioned Goodwill deposit.

Having seen a few pictures posted by others who have done similar modifications, I used those images as my blueprint in repurposing the space into what is now a nifty home for pots and pans. 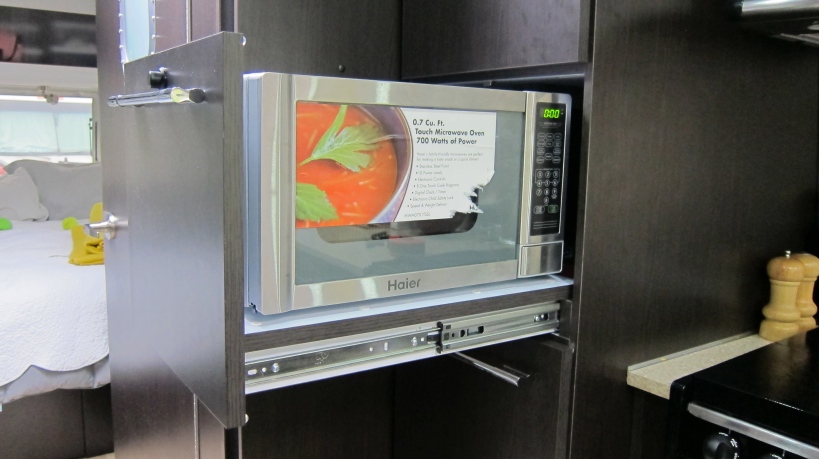 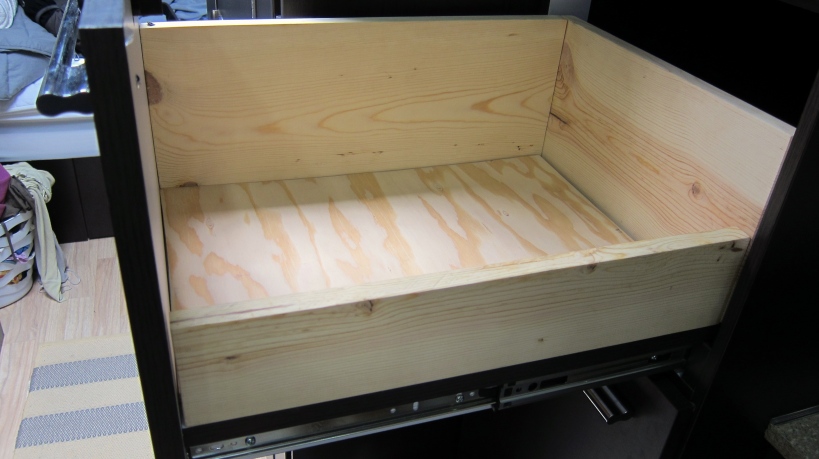 Ensuring all the pieces fit to my liking 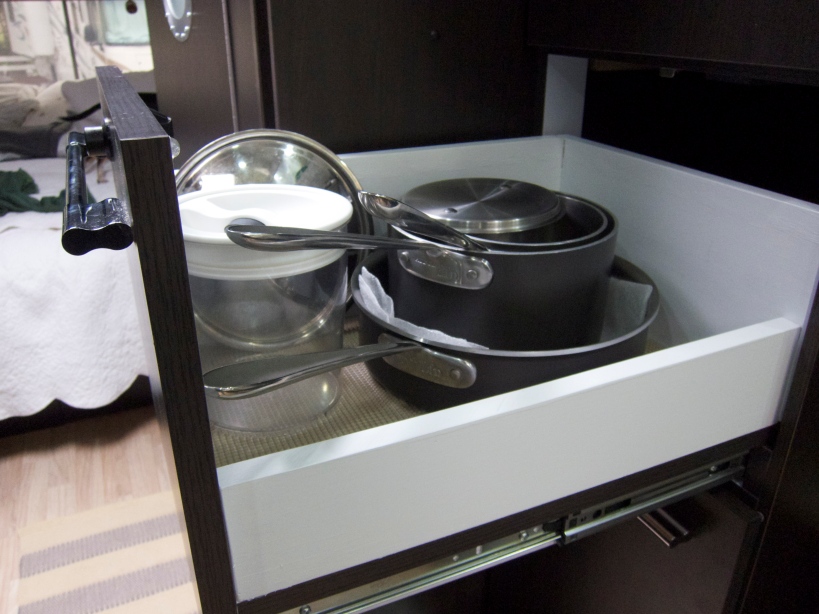 Painted and ready for action 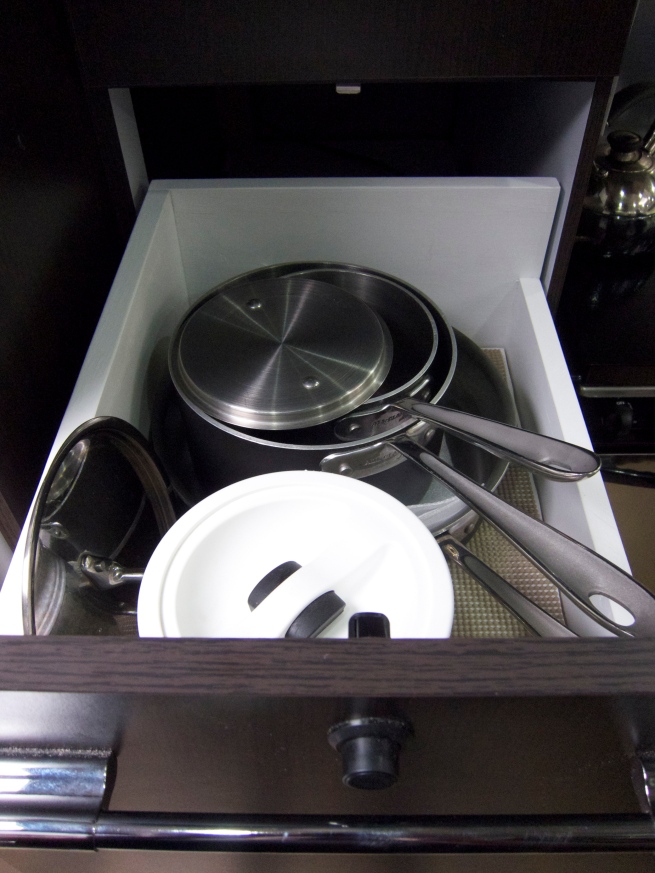 Not having any scrap wood handy, I dropped $7 bucks for some pine and another $10 for the paint.  If anyone reading post this happens to be a cabinet-maker or an avid woodworker, I’m sure you will find things to scrutinize in my work.  No matter.  Given the limited tools I had at my disposal, I’m quite happy with the outcome, even if it isn’t perfect.

All in all, a pretty straightforward and simple DIY project which also brings us one step closer to launch.