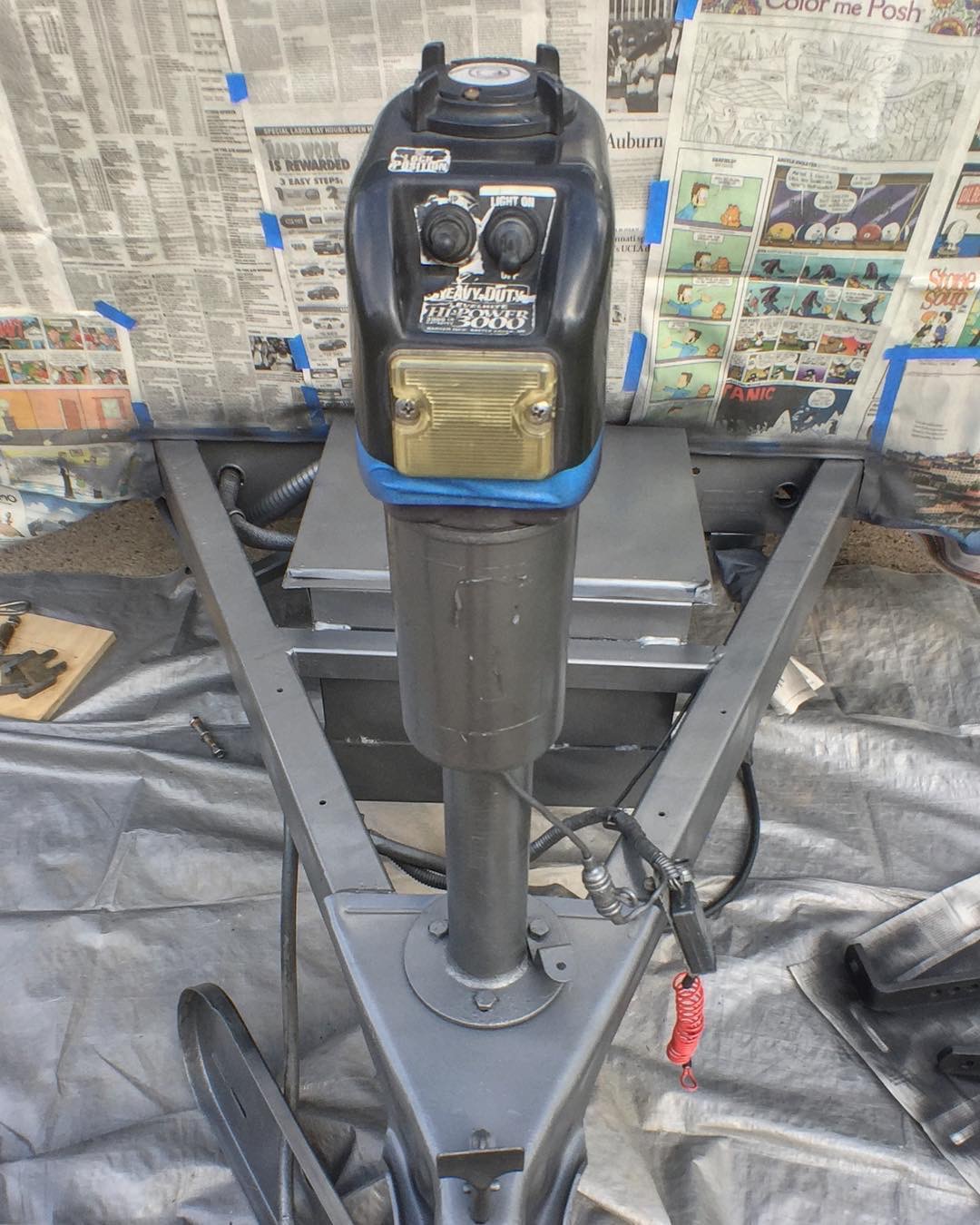 A lot of sweat, elbow grease, and a few beers later, things are once again looking presentable at the tongue end of the trailer.

45,000 miles of road scars are no more … and I’m looking forward to accumulating the next round of travel bruises.

In Need Of A Day Off

In desperate need of a weekend get-away, Kelly and I left our base in Half Moon Bay last night, retreating about 70 miles to the south.  Roughly 90 minutes later we arrived to Coyote Lake County Park about an hour after sundown, making our efforts to back into our site frustrating for us, but surely comical to others.

We’ve been here once before and made a mental note to keep this place on our shortlist of easy to access parks … especially since the area is very dog-friendly.

The timing of our escape was ideal, affording us the opportunity to watch stage-6 of the Tour of California – America’s largest and most prestigious bicycle race.  This multi-day event kicked-off Monday in southern California and concludes Sunday in the northern wine country town of Santa Rosa.

Today’s individual time-trial – commonly referred to as ”The Race of Truth” was occurring near our campground so Kelly and I killed a few hours this afternoon watching the event.  We rode our bikes to a particularly technical section of the course to view the action.

We saw some of the world’s top professional cyclists zipping through a downhill s-curve section of road at speeds pushing 30 MPH.  The time trial is set-up such that riders race individually against the clock – in this case 19.9 miles, starting in reverse order of their overall standing in the general classification.  We waited around to see the Maillot Jaune pass by, then hit the road ourselves, as I needed to complete a little RV maintenance project.

Last night as I was prepping the Airstream for travel, I noticed the electrical cord had experienced what appeared to be damage from a power surge.  The impairment looked fairly significant and I was thankful for my beefy surge protector, which I always keep connected … “just in case”.

Initially, my plan was to simply to buy a new cable, but when I saw the whopping Camping World $80 price tag I decided to explore other options.  As it turns out, the solution was quite simple actually – remove the damaged prong head and replace it with a new one.

I’ve always been a bit leery of electrical projects, but I located a replacement part for only $18.  Before talking myself into another course of action, I decided to go for it.

Having convinced myself that if things went horribly wrong and became a complete fiasco, I’d probably die quickly and without too much pain.  With this sound logic in hand, I figured why not give it a try?

I proceeded to sever the damaged plug, prep the wiring, attach to the newly purchased plug, and put everything back together. 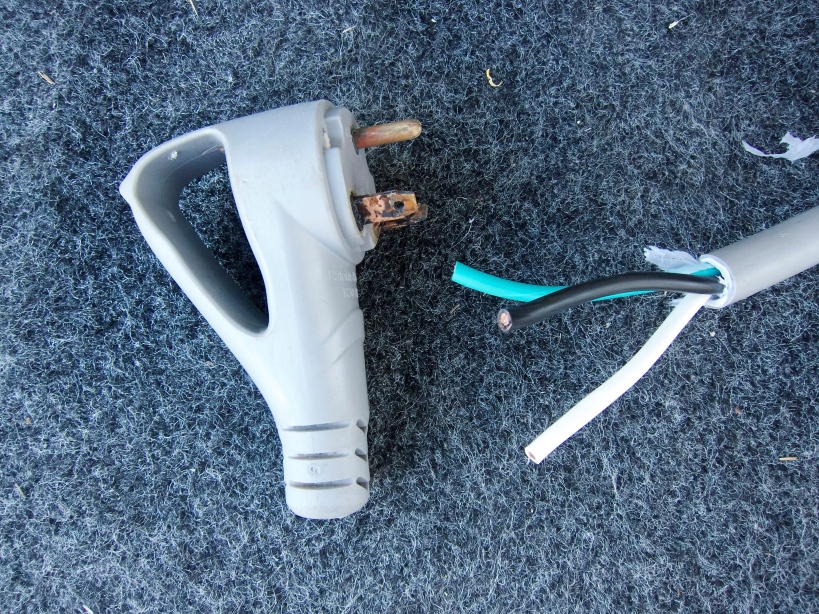 The damaged plug, whacked from the cord

All wires prepped and ready to proceed 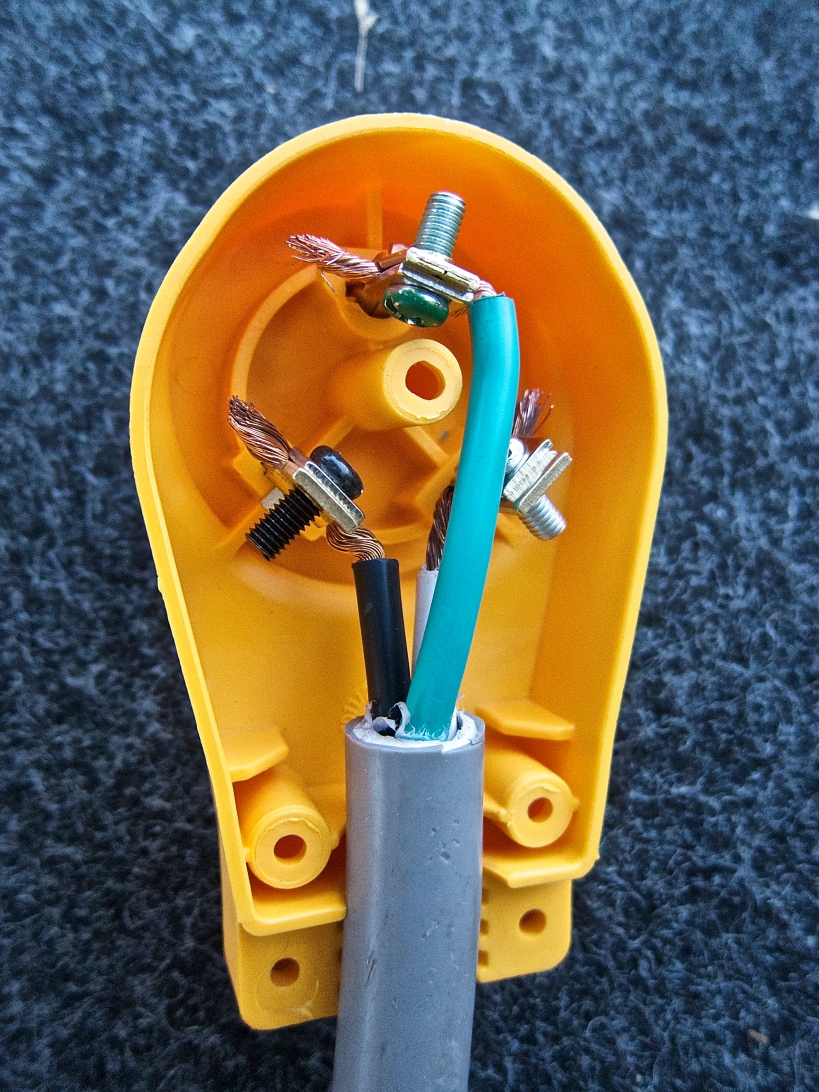 All the wires ready to go 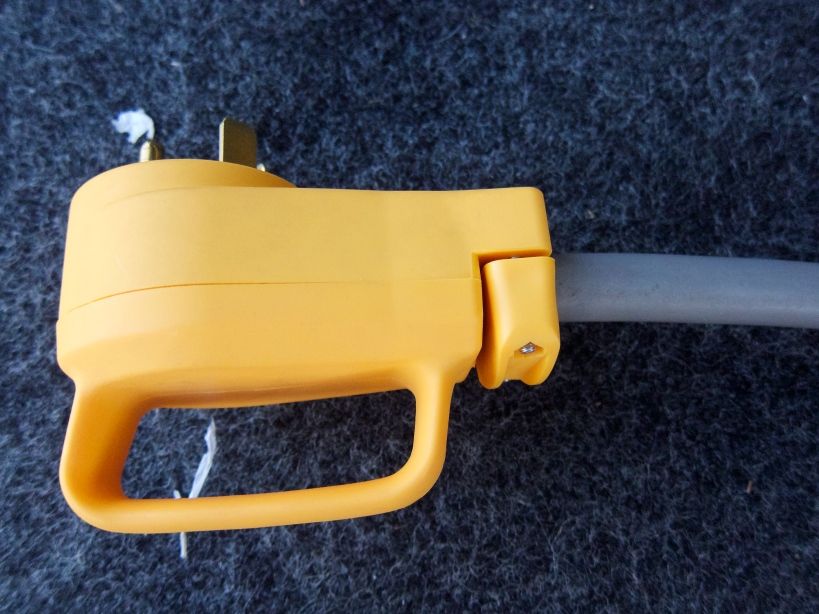 Obviously I didn’t die, as evidenced by me writing this posting.

In the end, the project was quite straightforward and embarrassingly simple.  That said, I’d be lying if I told you I didn’t take serious pause before plugging the newly repaired 30-amp cord into the generator.

Proud of my accomplishment, I embarked upon assisting Kelly with   another project of no less importance – dinner.

Following our meal, Kelly and I took Lilly for a trail hike and I rewarded myself with a cold beer.

Hillside hike with views overlooking the town of Gilroy, CA

All in all, a great usage of our long overdue PTO day.

Last Saturday Kelly and I concluded our two week holiday trip through the southwestern desert, but not before stopping for some maintenance at Toscano RV.  In the interest of brevity, I’ll summarize to the following — we arrived in time for repairs on Friday and decided to spend the night at the RV dealer as our preference is not arrive to our home base RV park after dark.

Our overnight spot at the RV dealer. No charge for full hook-ups (that’s us in the middle)

Saturday we arrived back to HMB, allowing Kelly one final weekend of complete freedom before starting her new job on Monday.  Alas, once again we are full-fledged DINKS.

This week has been a bit crazed for us, hence the lack of blog postings.  Before I knew it, the week had passed and I found myself jetting (pun intended) off to Europe on a business trip.

Currently I am in northern Germany, specifically the town of Hamburg attending to some work matters this week.  Unfortunately, the ways of winter apply here in Hamburg — it’s quite chilly and the days are short.  Thank goodness I had enough sense to bring a stocking cap and gloves. 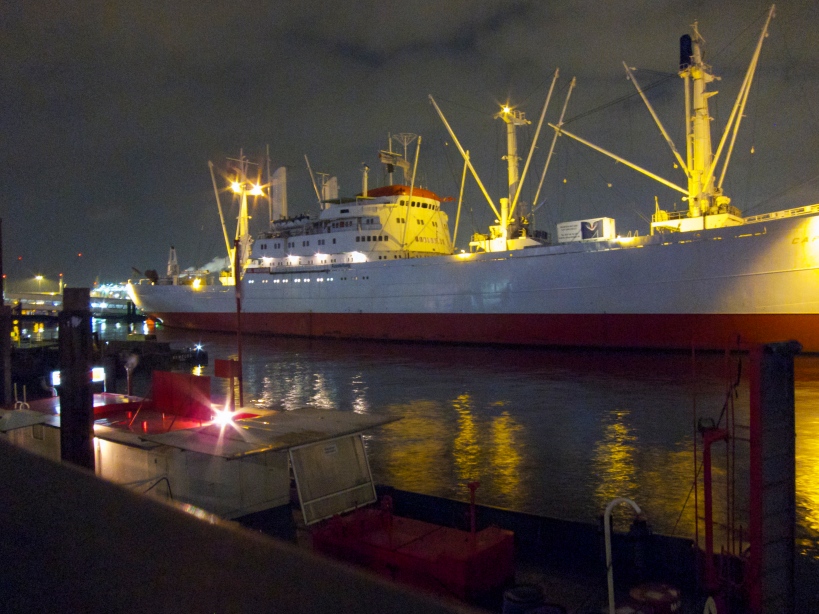 This is my second visit to the Hamburg office.  Unlike my previous visit, this trip affords me enough time that I hope to more thoroughly venture out after work hours and explore the town.

Per usual, I was not able to get any sleep on the long-haul portion (10 hours) of the flight (San Francisco to Frankfurt).  This being the case, I’ve been forcing myself to stay awake today until I know that I can get a solid night of sleep in an attempt to ‘flip’ myself onto local time (GMT +1.00).  Tomorrow evening I’ll know whether or not my plan worked.

Trying to stay awake has been a challenge this evening.  My hotel TV has a full array of satellite channels to view, but since I don’t speak German (or any other language for that matter), I opted to take a walk.  I wandered throughout the downtown and waterfront areas until (and I mean this literally) my feet were too cold to continue.  Long gone are the days when I thought 34 degrees was crisp.  Whatever, now I consider that to be cold.